I cut my teeth typing assembly language listings out of Byte magazine; overclocking used to involve unsoldering and replacing the crystal on the motherboard; operating system distribution used to come on multiple floppies. I’ve put in my dues to earn my GreyBeard status.

I have learned two undeniable truths:

Every time I was logging into one of the cluster nodes, I’d see this

I’ve been kicking the “ops” can down the road but I had some free time, so let’s break rule #1 and run sudo do-release-upgrade. Ubuntu has generally been good to me (i.e. it just works), so there shouldn’t be any problems. And there wasn’t. The in-place upgrade was successful across all the nodes.

Well that was easy. Might as well break rule #2 and also upgrade microk8s to the latest/stable version (currently 1.26). My microk8s version was too old to go directly to the latest version, so no biggie I’ll just rebuild the cluster.

And that is when shit when south. Damn, I broke my rules and got called on it.

Cluster dns wasn’t resolving. I was getting metrics-server timeouts. And the cluster utilization was higher than normal which I attributed to cluster sync overhead.

I went deep down the rabbit hole. I was focused on dns because without that, nothing would work. I used the kubernetes debugging dns resolution and tried various microk8 configurations. Everything was fine with a single node. But in a cluster configuration nothing seemed to work.

For my home network, I use pihole and I have my own dns A records for stuff on my network. So I also went down the path of reconfiguring core-dns to use /etc/resolve.conf and/or point it at my pihole instance. That was also a bust.

I also enabled metallb and this should have been my “ah ha!” On a single node, I could assign a loadbalancer ip address. But in a cluster, nope. This is all layer 2 type stuff.

Lots of google-fu, and I stumble across Portainer Namespace Issue. I was also using Portainer to troublehsoot. Portainer on a single node worked fine. But Portainer in a cluster could not enumerate the namespaces (cluster operation). But I see this post by @allardkrings:

the difference of my setup with yours is that I am running the kubernetes cluster on 3 physycal raspberry PI nodes.
I did some googling and found out that on the Raspberry PI running Ubuntu 22.04 the VXLAN module is not loaded by default.
Running
sudo apt install linux-modules-extra-5.15.0-1005-raspi linux-modules-extra-raspi
solved the problem.

That caught my eye, and clicking on the issue linked to that post made it click. I was also seeing high CPU utilization, metallb was jacked (layer 2), etc.

After installing those packages and rebuilding the microk8 cluster, everything “just works.”

Woke up today to some microk8 cluster unhappiness. Some auto upgrades caused my leo-ntp-monitoring app to stop. I’ve been lazy and using Portainer as a UI vs remembering all the kubectl command line shizzle. When I tried to pull up Portainer in the browser, it was giving me some message about “Portainer has been upgraded, please restart Portainer to reset the security context” or something like that.

Well shit. I don’t even have a cup of coffee in me and I gotta start using my brain. Here’s the shell script to restart Portainer.

I’ve been running a few docker workloads on various stand-alone raspberry pi 4 hosts. This has worked well, but I decided to up my game a bit and setup a Kubernetes cluster. Why? Kubernetes is the container orchestration technology that is taking over the cloud and figured it would be a good learning opportunity to figure out how all the bits play together.

For my workloads, I need a 64 bit OS and I am using raspberry pi 4 8GB boards with a power-over-ethernet (POE) hat. I am using Ubuntu Server 64 bit and I am using Microk8s for the Kubernetes runtime. The tutorials are straight forward and I am not going to rehash that, but instead call out the gotchas to look out for.

For my infrastructure stuff, I use DHCP reservations with long leases and make an internal DNS entries. This is a lot easier to centrally manage that doing static address assignments. I knew I was going to need k8 DNS support, so I did the following….

And then when I moved my docker hosted container into a pod it failed. After a little troubleshooting to make sure there wasn’t any network layer issues, and validating that I could resolve external DNS names, I knew the problem was CoreDNS wasn’t pointed at my internal DNS servers. There are a couple ways to fix this…

I wanted to run a private registry to start with. Why? ISP connections can fail and it is also a fast way for me to experiment. Microk8s is the container orchestration layer, and it is using Docker for the container runtime. Docker by default will attempt to use HTTPs when connecting to the registry, which breaks with the private registry. You will see an error such as “…http: server gave HTTP response to HTTPS client.”

I am running a 3 node cluster, and I setup the registry storage on node-01. So we have to make some configuration edits…

I ported the leo ntp time server monitoring to run in the microk8s cluster. It has worked flawlessly until it croaked. The entire cluster was jacked up. I was using channel=1.20/stable which was the latest release at that time. I have since rebuilt the cluster to use channel=1.21/stable and everything has been bullet proof.

I plan to build an ADS-B tracker. However, I live in an RF noisy urban neighborhood, and all that noise can desense an RF receiver, so I bought this FlightAware Dual UAT+ADS-B filter. I put it on the spectrum analyzer and I measured a passband from ~930Mhz to ~1.2Ghz with ~1.5dB of insertion loss. Since this is all up in the gighertz range, my plan is to keep the antenna feedlines short by mounting a raspberry pi 4 in a weather-rated enclosure close to the antenna. I’ll power all of it by running a network cable with POE to the raspberry pi with a POE hat.

This little device uses the GPS satellite’s atomic clock to provide a highly accurate stratum-1 time source to your network. Wouldn’t it be great if you can pull metrics from it so you can monitor performance? Then you might want to checkout the monitoring shizzle I built. It runs in a docker container and feeds time series data to InfluxDB. 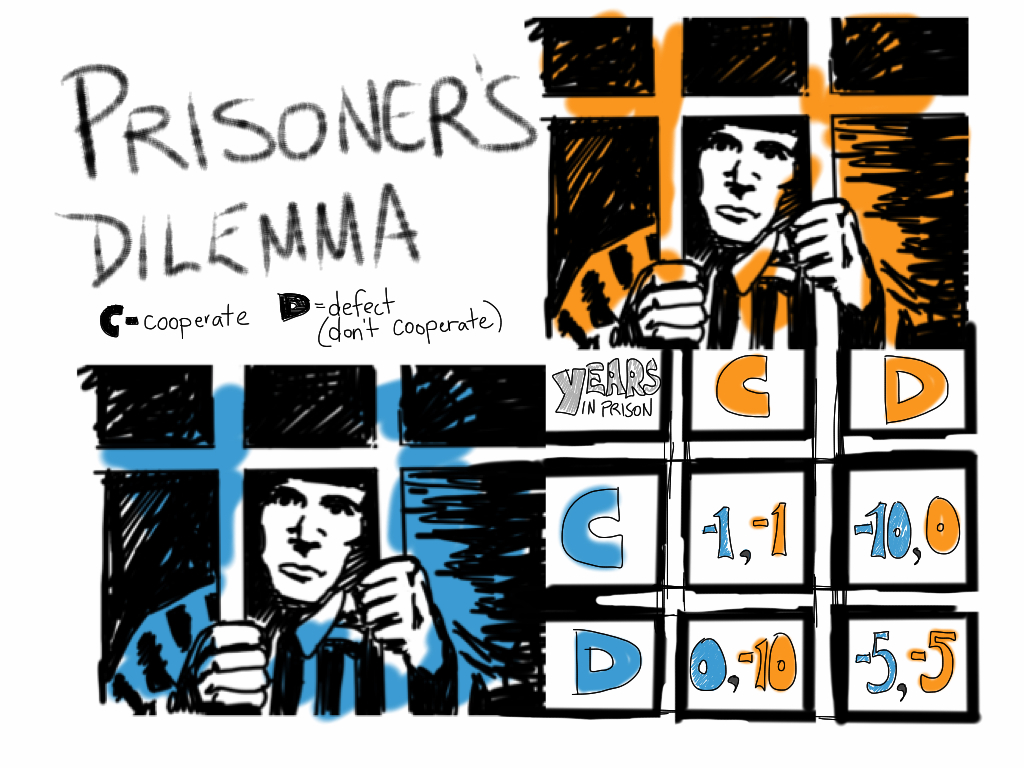 Prisoner’s Dilemma comes from game theory. Essentially, two prisoners are not allowed to collaborate, and then are presented a set of options: stay silent and get a guaranteed sentence, or cooperate and get immunity. The optimal solution is to stay silent.

What does this have to do with Corona Virus and Covid-19? Right now, the only effective way to mitigate the spread of the virus is through social distancing: staying away from others to slow the spread. But humans can become irrational in time of panic – really toilet paper?

Corona Virus is now a pandemic and we now have a prisoner’s dilemma problem at a global scale – in absence of a cure/vaccine, the only other way to get this virus to go away would be to blunt the transmission: 7 billion people go on lock down/isolation for ~3 weeks. Otherwise, once people start moving around again (travel, random social contact, etc.) you will just get more flare ups. This isn’t feasible.

What’s not the solution? Self-interest. If you pursue your own self interests, and everyone pursues their own self interests – i.e. everyone goes Mad Max Thunder Dome, that puts excessive demand on supply chains and the health care systems. This will feed panic, which can turn to social unrest, and a bunch of other shitty outcomes.

What is a solution? Cooperation. What does cooperation look like? Practice social distancing. Don’t horde. Help your neighbors and the less fortunate. Maintain your physical and mental health.

Prisoner’s Dilemma. Accept the fact that this Corona Virus pandemic will affect you either directly or indirectly. You will not come out unscathed. The optimal solution for society will be cooperation not individualism.

You’re about ready to get your radio geek on and you get a PortAudio Error -9999 Unanticipated host error, followed by a PortAudio Error -9988 Invalid stream pointer.  WTF since everything was working fine on Windows XP/Windows 7/Windows 10.  Well, the mighty fine folks at Microsoft decided to tighten up security with applications (“apps” if you’re cool) permissions to access the microphone.

The fix is straight-forward:  On Windows 10, you go to settings->privacy->microphone and enable it.  If you are privacy concerned like me, you can then go through the “Choose which apps can access your microphone” and turn them all off.

For you new software engineers – this is a great example of a shitty error message.  If the message said “Access denied while trying to open your microphone or input device.  Please make sure this device is enabled and the access permissions are correct” that would make it much easier to diagnose the issue.

This hack is brilliant:
In today’s digital age, a large Instagram audience is considered a valuable currency. I had also heard through the grapevine that I could monetize a large following — or in my desired case — use it to have my meals paid for. So I did just that.

I created an Instagram page that showcased pictures of New York City’s skylines, iconic spots, elegant skyscrapers — you name it. The page has amassed a following of over 25,000 users in the NYC area and it’s still rapidly growing.

I’ve started to get into endurance type riding.  I was doing 50+ mile rides on the hybrid bike, but it was time to graduate to a road bike.  I bought a new Trek Domane SL8 road bike that has carbon with more carbon and a full Shimano Dura-ace group set.  It came with a compact crank (50/34) paired with a 30-11T cassette.  Since I am doing some events with 7000+ feet of climbing, I wanted to be able to “call granny” to save my ass when my legs turn to rubber.  The largest Dura-ace rear cassette is 30-11T, but you can swap in a Shimano Ultegra R8000 32-11T cassette without any problems.  I didn’t have to lengthen the chain or do any other trickery such as using a Roadlink by Wolf Tooth..  The image above shows that the derailleur is not hitting the cassette even when in “big-big.”

Just finished trashing 183 spam comments.  The spam techniques were interesting – some used flattery to try to disguise the spam, others were just flat out proud of their spam.  I could install comment filtering tools, but that’s work and cost.  Time to change the comment settings.